A pulsating match unfortunately ended in defeat for OLI, as St. Matthews ran out 14-9 winners. The early stages of the match were very scrappy with both teams trying hard to gain dominance in possession. As the game settles, the opposition scored two quick goals before Kian and Joel levelled.

This pattern continued, as OLI had to keep fighting back from a goal down until just before half-time. Two volleys from Joel gave OLI their 6th and 7th goals, putting them ahead for the first time in the game. 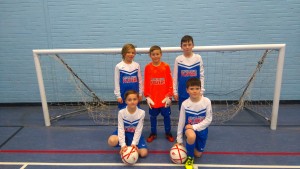