Congratulations and thank you to the year 5 and 6 boys who represented our school on Thursday 2nd March against Our Lady and Saint Philomena’s School. The boys were coming off a hard-fought defeat and were looking to bounce back with a win.

OLI got off to an incredible start, with a Billy Smith long pass bouncing through everyone and into the back of the net within 20 seconds! Billy was delighted to score his 1st goal for the team, it won’t be his last!

It would have been easy for the boys to push back and defend, but they pressed on with their attack; Kian Skinley scored from close range shortly after to put us 2-0 up.

Joe McFarlane-Wells has been looking for his 1st goal for OLI for a while now. Whilst 2-0 up, his header hit the bar, then the post, then was cleared off the line! 4th official Mr. Garth had a look at the goal-line technology and ruled no goal! This didn’t matter though, as Joe scored a similar header a few minutes later, before Kian scored another close range effort. On the edge of half time, skipper Sonny Geraghty scored a long range screamer and the half ended 5-0!

Some teams would have eased off there, others would have shown disrespect to the opposition, but the boys did themselves proud by being polite and calm whilst playing, but making sure they didn’t stop giving 100% effort. The 2nd half saw goals from defender Ruben McNeil and 2 more goals from Joe giving him his hat-trick! An own goal just before full time saw OLI finish as winners, 9-0.

A huge well done to the team, not just for the big win, but for being gracious winners this week just as much as they were humble losers in our last game. Condolences to Our Lady and St. Philomena’s who are a new team still working on making their team as strong as possible. One final mention to Billy Smith who deserves huge praise for assisting so many goals that he’d forgotten how many by the end of the game!

MOTM: Joe McFarlane Wells, for a stunning hat-trick, good teamwork and always being professional and respectful to the opposition. 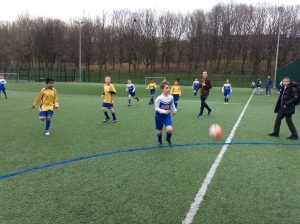 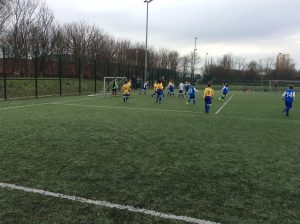