A huge thanks to the year 6 boys who participated in a 6-a-side tournament today at the LFC foundation.

The boys were exciting to play in the mini-league format, and with scouts watching on they wanted to put their best efforts in to represent OLI and possibly enter a regional final!

The league consisted of playing 4 small matches with a team of 6 and 2 subs. The first game began with a bang, as captain Joe McFarlane-Wells scored a stunning hat-trick, added to with a goal by number 10 Bobby Mitchell. The match ended 4-1 and the boys began their league campaign off wonderfully.
MOTM: Ruben McNeil

The boys hoped that their good form would continue to the second match, which proved to be true when a long range effort (maybe a pass?) from Bobby Mitchell landed in the top corner! Unfortunately OLI conceded a late goal from a fast, low effort. Billy Smith hit the frame late on which unfortunately meant the game ended 1-1. 4 points out of 6 meant that it was still all to play for!
MOTM: Francis Westhead

The most entertaining game was undoubtedly the 3rd one. It was an abysmal start for OLI, the late equaliser from the previous game resulting in a slow start that saw the boys go 2-0 down. However, a peach of a volley from Zac Abbou made it 2-1, before a stunning solo goal from Joe saw OLI equalise. Joe took on 3 defenders down the left wing before rounding the keeper and slotting the ball in. Dribbling past 2 thirds of the opposing team to score meant that Joe won the “goal of the day” award from the event organisers. The game ended 2-2.
MOTM: Joe McFarlane-Wells

The final match was against the league leaders and a tense first half ended goalless. Zac Abbou came on at half-time and scored with his 2nd touch! A truly masterful decision from the coach… An equaliser quickly went in that saw another tight draw end the league campaign. Excellent defense from Jake, Kamil and Ruben limited the league leaders to just 1 goal.
MOTM: Zac Abbou

The boys finished the day undefeated. This saw them finish 3rd in their league. If I were an LFC scout, I’d sign them all. Their sportsmanship and attitude were flawless and it was a pleasure to be there representing OLI with them. 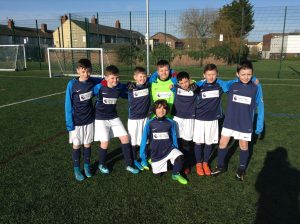