The last couple of days have been monstrous and I feel pride; I am currently worn out and my body needs a rest.

Two days ago, I was looking for wood to build so homes and make mine bigger when I suddenly saw some heavily armoured Vikings and their leader Guthrum. He was covered in rose red blood with a look of hate in his eyes.

I ran as fast as the wind back home to my village. Would you have fought on your own? Therefore I had to go back. I was so relieved when I reached the edge of the forest. Eventually I ordered a village meeting and ordered my men into battle; they were loyal so I knew I could trust them.

Me and my men chased into battle with our mighty axes and our shiny, stone knives. Just then my men started killing and being killed. It was dreadful. I could smell the rotting corpses and see the shiny, ruby-red blood my warriors and their victims. Suddenly a Viking charged at me… I put my shield up and it got chopped in half! I swung my axe just in time, hitting the Viking in the neck and killing him instantly. Just at that moment Guthrum surrendered as he had lost men and was injured.

Me and my warriors felt superior but a little bit depressed because a lot of troops were killed in this bloody scene. Guthrum converted to Christianity and was baptised by me! Therefore me and Guthrum signed a treaty, giving peace in England.

The last few days have been depressing, difficult and tiring; I’m currently feeling exhausted and my mind needs to have a long rest.

It all started when i was hunting deer in the misty, murky forest with my mighty axe when I suddenly saw the almighty King Alfred The Great, armed with his shiny weapons. The idea to ambush him popped into my head so I sprinted back to my village to get my loyal followers.

With Alfred captured, I took my chance to invade Wessex. Unfortunately Alfred escaped and it caused a horrible battle. Blood covered the field and I could smell it in the air. The corpses of dead men were everywhere. The only thing I could taste was fresh blood. Alfred was charging like a wild boar. I thought to myself “what was I going to do?”

This defeat was very tough, so I decided to convert to Christianity to make sure it didn’t happen again. After that me and King Alfred decided to agree a treaty so we would have peace over England and our people.

Speak to you soon Diary,

Firstly, people say we should protect the rainforest because we are destroying animals’ habitats and these animals would possibly be extinct in the next hundred years. Furthermore, oxygen would be eventually decreasing and there could be more carbon dioxide (CO2). Could this be acceptable?

On the other hand, people say this actually a good thing because we get some vital resources like paper, which we write on and wood, which we make into furniture. In addition, we could sell the deforested land for money and that could get people some jobs.

However, people say that destroying the rainforest could be like destroying God’s creation and it’s kind of like wasting his time. On the other hand, many animals will get looked after in captivity; will this be continuing?

Therefore, to conclude, I personally believe that we should protect the rainforest because certain animals will get extinct for example, big cats such as tigers and lions and a variety of panda species and also ingredients for curing diseases are getting destroyed such as, Cortisone and Rosy Periwinkle but other people might have other reasons to protect or not protect the rainforest.

I am writing to discuss the important debate as to whether or not we should protect the rainforest. I have different opinions than other people.

Firstly, some people believe that we should protect the rainforest. For example we need loads of things like oxygen so we can breathe. Less CO2 is captured by the forest, worsening the effects of global warning. In addition, some don’t believe we should get that. So wood removed from trees can be used to make paper, tables and other products, but is it necessary to cut trees down?

On the other hand, some people say we shouldn’t protect the rainforest but why? Plants that may have been useful as medicines could be lost. However, fruit that we could eat would be lost and some healthy food could just be gone. Products such as chocolate and coffee can be grown more cheaply on areas of deforested land. Furthermore, jobs are created in logging transport and manufacturing products.

However, animals and plants may become extinct through loss of habitats. For example animals like: big cats, pandas and so on. Would you destroy God’s creation and why?

Do you think animals are safe in captivity/zoos? Different people think they are safe and some don’t think that. Zoo’s could be safe for animals in some people’s opinion.

Therefore, to conclude, I think we should protect the rainforests because animals deserve a home and we risk ruining the environment. Many have different opinions but I respect that.

I am writing to discuss the important debate as to whether or not we should protect the rainforest. This is a very important issue and I will be discussing this problem with you.

Many people believe that it is bad to cut down the rainforest, since it takes our oxygen away. On the other hand, we need wood and paper for our every day life. But is this actually worth it?

However, by cutting down the rainforest means Animals can come to extinction and there wont be many animals left this means you wont be able to go to the zoo or more places like that. But at the same time the Rainforest produces jobs so more people can be working and getting paid this means that people will have money so they can afford food and won’t be starving.

Therefore, to conclude, by destroying the Rainforest means landscape is getting destroyed and god’s creation. Can you feel the guilt destroying God’s creation. On top of that, wood produces furniture for example tables, doors and chairs.

In my opinion I think that destroying the Rainforest is bad for a   variety of things, for example I think we could live in the world with no wooden tables/chairs. But people have different opinions and will probably see this problem the other way.

On Wednesday 7th of February, Mr Fairclough’s group went on a trip to Anfield stadium to learn about internet safety. At 9:30 AM we left school with Ian, Mr Fairclough and his group. We felt excited but Joe and Kamil felt sick because they were Everton supporters.

We arrived at Anfield Stadium at 10:00 AM. We got a picture with Mighty Red (Liverpool’s mascot) except for Joe and Kamil. It was really exciting but Joe and Kamil thought it was mighty bad!

After that, we went into Anfield stadium and saw a presentation about internet safety. We learnt how to stay safe on social media. It was very informative. Then we met a special guest, Gary McAllister, and he spoke to us about being safe online. Mr Fairclough got a selfie with Gary and it was very embarrassing.

Following that, we did a fun activity about emojis. We learnt about how dangerous emojis can be, because they could be misunderstood and can cause arguments.

Penultimately, we did another activity about cropping pictures. We did a puzzle of a segmented picture that had been cropped. This shows that cropping pictures can be really dangerous because you might need permission of the person you are taking a picture of; they might get annoyed or angry.

Do you stay safe online? 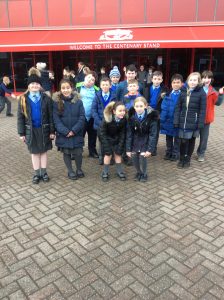 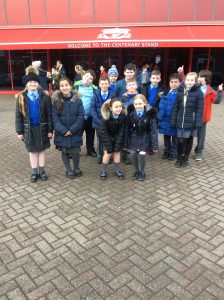 As we arrived at Stanley Park, lots of feelings were rushing through me. At the start I was nervous and I was amazed that I came first. It was an amazing feeling!

I’m going to go this Sunday to the park to take part in the race again and I want to get into the school cross country team!

If I could disappear,

I would go to a desert island.

If I could be anything in the world,

I would be an owl, swooping through the air for my prey.

If I could have one wish,

I would wish to see my Nan once more.

If I were famous,

I would donate to a cancer charity.

If I could travel back in time,

I would grab every single happy memory.

If I could go on a special holiday,

I would go to a special dimension.

I would sing my heart out.

If I could achieve one thing,

I would achieve the expected level.

If I could go forward in a time machine,

I would see if I did well in my SATs.

I would like to be on I’m a celebrity get me out of here.

If I could fly,

I would go to Heaven for 60 seconds and see my grandad and my great Nan.

If I had one wish,

I would wish for a cure for cancer and the ability to help all of the people in Africa who are really sick.

If I could be a tree,

I would be dancing through the coughing wind.

If I could achieve something,

It would be to get the expected level in SATs.

If I could have any job,

I would be an actor.

If I could cure anything,

I would be able to cure bowel cancer.

If I could go to one place,

I would go to New York.

If I could travel back in time,

If I could keep one memory,

I would go back to Christmas day with all of my family.

I would give half to the Woodlands who looked after my Nan and made her happy.

I would be able to fly.

If I had one holiday,

I would go to Australia and see all of my family there.

If I could have a job,

It would be to help people.

If I could have one wish,

I would make everyone better and not to get sick again.

If I could have one solution,

I would make my mum better.

If I could have one special holiday,

It would be to spend it in heaven.

If I could be an animal for a day,

I would be a mouse.

It would be to go back in time.

If I could be one famous person,

It would be a singer who is known the best.

If I could achieve anything,

It would to be a footballer.